This was the last day of the year, but also the hottest. With the temperature touching 38°C, even the sea wind was warm on our faces, as we bounced into it over the swell. Passing Tasman Island, we headed out toward the Southern Ocean. The next land was the Antarctic, 2500 miles away.

We had left Hobart before 8 am, and travelled to Port Arthur to board the boat that was to take us on our trip to the edge of the continental shelf. Leaving the jetty, we headed out past a gap in the trees that afforded us a first glimpse of Australia’s most notorious penal colony. A short distance beyond this, our boat slowed down, perhaps to allow us to show a measure of respect as we passed the Isle of the Dead, where more than 1100 convicts, a high proportion of them Irish, lay buried in unmarked graves.

The Tasman Peninsula occupies the south-east corner of Tasmania. It is separated from the rest of the state by the Forestier Peninsula, which is itself constricted at both ends by narrow isthmuses. The narrower and more southerly of these, Eaglehawk Neck, was guarded, during penal times, by ferocious dogs that made escape from Port Arthur virtually impossible.

Though there is farmland, much of the peninsula is covered by natural vegetation, which supports more than 500 plant species, many of them rare elsewhere in Tasmania. Mammals include pademelons, Bennett’s wallabies, wombats, possums and even small numbers of Tasmanian devils and eastern quolls. Some 120 species of bird have been recorded.

We moved past a line of crumbling cliffs of soft, Permian mudstones. Cormorants perched on undercut ledges, while the high trees above held the nests of white-bellied sea eagles.

Geological activity has resulted in a variety of landforms and a spectacular coastal scenery, Earliest are the mudstone marine sediments of the Permian era, dating back 250 million years. Then come the Triassic sandstones, and most recently the volcanic, dolerite intrusions of the Jurassic.

Erosion by the sea has significantly reduced the heights of the sedimentary cliffs, while merely smoothing off the sharp edges of the much harder igneous. In all three regions, the rocks have been undercut, in places, to leave arches, caves and stacks.

The seas around the peninsula contain common and bottlenose dolphins, pilot whales, several varieties of seal and leatherback turtles. And there is the seasonal spectacle of humpback whales, migrating between the Antarctic and the Great Barrier Reef.

We continued across the bay, into deeper water, green with phytoplankton. The eastern cliffs, impressive from a distance, grew even more so as we approached. Tall columns of Jurassic dolerite, they rose vertically from the sea to crennellated summits At their base were a series of caves, which did not appear too large, until one of them swallowed another cruise boat, the twin of our own. 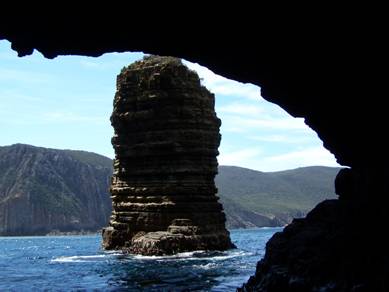 When our turn came, we also drifted slowly into the darkness of the cave. The wall at sea level was a vivid pink, from the coralline algae that was able to absorb the minimal sunlight that scattered into the darkest recesses. Clinging to the rocks at the cave mouth and along the base of the cliffs, were thick, tough fronds of bull kelp. Large jellyfish pulsated in the water.

We snaked around myriad rocky coves, past mini-islands and peninsulas, populated by gulls, gannets and cormorants. New Zealand fur seals basked on narrow platforms above the kelp, well out of reach of the waves that must have lifted them there on a higher tide. For a short distance, the cliffs fell back, shrinking into the horizontally layered sediments of Triassic sandstone. Some sections had broken away from the cliffs and now stood above the water as precarious-looking stacks.

Then the dolerite again became dominant, rising to the 320-metre-high cliffs of Cape Pillar, the highest sea cliffs in Australia, and among the tallest in the southern hemisphere.

We now headed out past Tasman Island, and away from land. The boat accelerated, and began to bounce violently over the waves. Each bang brought yells of excitement from the passengers, and a splash of spray that explained why, in spite of the heat, we had all been given waterproofs to wear on boarding the boat.

We continued to where the continental shelf dropped suddenly to a depth of 1000 metres. Ahead of us, a large flock of short-tailed shearwaters, perhaps more that a hundred strong, frenetically plundered the sea’s rich harvest, accompanied by a single, unhurried albatross.

For a few moments, the sea in the midst of the shearwater flock appeared to toss and bubble. Then the spray transformed into a pod of dolphins, which came bounding toward us. They seemed to be as excited as we were. While nearly everyone on board clicked away with their cameras, the dolphins swam alongside us, leapt into the air and rode the bow wave, as if knowing that we wanted them to perform as dolphins are expected to perform. Even the two or three small children, who had been apprehensive at the previous buffeting over the waves, became transfixed by the theatricals. After several minutes, we swung off to the west. The dolphins, seeming to lose interest in us, went away to investigate another boat.

But the wonders were not finished. Ahead of us, the flock of shearwaters thinned, giving way to around two dozen albatross, that circled calmly over the wave crests, with scarcely a wing beat. Even our guides were amazed. Neither had seen more than two or three of these normally solitary wanderers of the open ocean on any previous occasion.

We circled back toward Tasman Island, its table-top summit supported, like Cape Pillar and the peninsula, by vertical dolerite organ pipes. On the mainland side, these were again broken into platforms, from which the tossed-off crests of the highest waves cascaded back into the sea.

Packing these ledges were herds of Australian fur seals, larger and noisier than their New Zealand relatives. As we passed, they called out, either to their companions or in warning to us. Occasionally, one or two plunged into the sea, and after a few moments of submersion, bobbed their heads up for a closer look at our boat. Their companions seemed content to bark insults at us from the safety of their cliffside retreats.

We now headed back to Port Arthur. We had seen no whales, or even the penguins that frequent the peninsula. Or perhaps they were there, but with so much else to draw our attention, we had simply missed them. With the birds, dolphins and seals, and the magnificence of the sky-scraping cliffs, we had more than sufficient to remember about this trip.

And as it was still early afternoon, we had time enough yet to explore the penal settlement before returning to Hobart for the New Year festivities.