I have my own theory as to why people take up rock-climbing, as a sport. It has to do with chance, and being in a certain place at a certain critical moment in time. Nothing more. The person concerned will climb what is often little beyond a long and airy staircase, yet it is the freedom of this airyness, the conquest of its fears, the thrill of stepping like a ballet dancer in perfect muscular control over a void seen only by the eagles, that later becomes a drug.

The climber, when the appeal of the staircases palls, moves on to moderate, and difficult, severe, very severe and finally extremely severe rock routes. And the withdrawal effects can be just as painful as those of the mainliner.

Even when he has mastered some of the hardest climbs in the country, the search for more thrills continues. Up to a point, the climber’s success has depended only on his ability, for he knows that the climb is possible; it has been done many times before; its description and grade of difficulty are there for all to see, in the guide book that anyone can buy.

So his search leads him to a rock face on which the outcome is uncertain. It has never been climbed before. 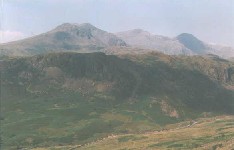 On a dull, October day, Brian and I uncoiled our ropes below an isolated crag in Upper Eskdale. We had walked for two hours, laden beneath heavy rucksacks, to get here. The summit of Scafell was about a mile farther, but held no attractions for us that day.

A hundred foot scramble, up steep heather and broken rock, brought us to a ledge below a 250 ft corner. The start of this corner was hard, but after several attempts, I moved into it, and progressed more easily. After 30 feet, I was standing on a small ledge.

This was my ledge. My discovery. No one, ever, had stood here before. Water trickled on to it from a crack above, to feed moss that had grown here for countless centuries. A few feet across the wall to my right hung a tuft of faded purple, relic of the ice age – an alpine plant that had found lodgement there when conditions were alpine, and had somehow survived. I hoped it would continue to survive the depredations of me and my kind.

I called down to Brian that I was ready to attempt the overhang that now blocked my way. I moved up from the ledge, fingertips clinging to a crack in the corner, toes on thumbnail flakes of rock on either wall. Higher and higher I climbed, farther and farther out of balance as the lip of the overhang pressed onto my chest.

The moments of suspense were mine also, created by me, and sustained in their existence only by my will. Was that a good handhold, five feet above me? No one could tell me. I had to discover the answer for myself. The moves I made were irreversible. If a hold were not there, I was in trouble. Yet it was for such sensations that I had come here: the thrill, the breath-holding uncertainty, the feeling of life on a knife-edge, when all considerations of the world are swept aside, and pure, unalloyed freedom sweeps through the body. It is only by risking all that one can gain all.

Higher I inched my way, a silent prayer trying to fight its way through my gasps. My ledge was now far below me. Too far. Above were only the limits of my body and mind, which I found myself pushing, exultantly, farther than I had thought possible. And for a moment, I knew that there were no limits, but that was just as my hands clasped the huge flake that ended all difficulties, and the moment quickly became a memory.

The rest of the climb was pure pleasure, as we rose through the air, far above the valley floor, our heads still fizzing from the experiences we had had lower down. An hour later, we stood again at the foot of the crag, and gazed proudly at the climb we had created. We said nothing. We had no need to speak.

Mystics spend their lives searching for themselves. Much of the anguish of the modem world, which leads people to all manner of excess, has been attributed to the fact that individuals do not know who they are. It has almost become a cliché. Yet, for a brief fraction of time, high on that crag, where no one had ever been before us, we had both known exactly who we were.