This feature was written following a cruise as guest of Gordon River Cruises, Tasmania.

This was a grim place. Fragments of redbrick walls stood proud of the grass and appeared to be struggling to hold back the encroaching forest. The stunning beauty of the surrounding pristine wilderness seemed to be tempered by a silence, which sucked in the sounds of the guide’s voice and the incessant birdsong. For this was Sarah Island, site of the earliest, and perhaps most brutal of Tasmania’s penal settlements.

I felt a little uncomfortable with the buffet I had just enjoyed on the upper deck of the luxury catamaran, Lady Jane Franklin II: potato salad, vegetable salad, smoked salmon, ocean trout, smoked wallaby, washed down by a choice of beverage; an extreme contrast to the fare of Alexander Pearce and other escapees from the prison, who in desperation, had resorted to the most gruesome of diets.

Some five hours earlier, we had sailed out of Strahan, the tiny port at the northern tip of Macquarie Harbour, Australia’s largest, six times the size of Sydney’s, situated on the west coast of Tasmania. The sky was overcast, with mist hanging over the surrounding hills, but a few encouraging patches of blue to the west. Our boat had followed a long curve, south swinging round to north-west, and out through the narrow, rocky gap of Hell’s Gates into the Southern Ocean.

To the north of the gap, waves broke over a broad sand spit, which ran on toward coastal dunes. This sand once threatened to block the harbour, a problem that was solved by the construction of the‘training wall’, a long line of rocks just inside the mouth, which channelled the tidal currents so as to scour the entrance without the need for constant dredging.

Named by the convicts, Hell’s Gates is the narrowest harbour entrance in Australia, allowing the passage of vessels no larger than 3000 tonnes. Nevertheless, it was once a busy thoroughfare, carrying ships built in Strahan from Huon pine, many of them laden with copper ores mined in nearby Queenstown.

Guarded by a lighthouse, Hell’s Gates was always dangerous, accounting for sixteen shipwrecks over the years. The most poignant of these, in 1907, involved the family of the lighthouse keeper, who watched helplessly as his wife and two children drowned, while returning from a holiday on the SS Kawatiri. 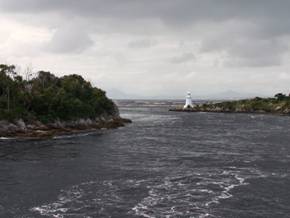 After a brief taste of the comparative roughness of the Southern Ocean, we returned through Hell’s Gates and took a course along the south shore of Macquarie Harbour. The hills above this shore were less wooded with exposed crags. The button grass that covered the hills leaked tannins into the water, staining it a dark brown, which was churned up by the boat’s wake. The combination of fresh water in the upper layers and salt water beneath is ideal for the farming of salmon and trout, in the numerous cages we passed, each holding up to thirty thousand fish.

The boat continued, passing Sarah Island for the first time, and on to the mouth of the Gordon River, where we entered the Tasmanian Wilderness World Heritage Area.

Here, everything changed. The open freshness of Macquarie gave way to a sense almost of claustrophobia. On both sides, a dense forest crowded down the steep hillsides to squeeze the river. The boat slowed, so as not to create a wake that might damage the pristine growth. The slopes were coated, without a break, by countless variations on the theme of green, representing trees with exotic names like myrtle beech, leatherwood, blackwood, pandanus, tree fern and sassafras. Many of these are found only in Tasmania, having evolved on the ancient super continent of Gondwanaland, becoming isolated when that landmass fractured between 130 and 160 million years ago.

The most important tree is the Huon pine, which after the North American bristle-cone pine, has the longest lifespan of any organism on Earth. Specimens have been found that are 3000 years old. Its wood rots with glacial slowness, and it resists virtually all known marine borers. This, in the nineteenth century, made it one of the finest shipbuilding materials in the world.

The 1.38-million-hectare Tasmanian Wilderness is one of the few remaining temperate rainforests in the world. Its UNESCO World Heritage status is supported by seven out of the ten criteria that govern such classification, four of them natural and three cultural. Of the 890 sites throughout the world, only Mount Taishan, in China, boasts as many criteria. This pristine wilderness, which encompasses one-fifth ofTasmania, is therefore almost unique in the world, and hence extremely precious.

But this was not always realised. In 1982, a proposal was made to dam the Franklin River, a tributary of the Gordon, and flood huge areas of the forest. An unprecedented campaign by environmentalists was launched, which split families, put the State Government at odds with the Federal and went international. Eventually, the environmental case prevailed, and the rainforest was saved.

Vigilance is still needed, however, as the threat of fire is ever present. The rains carried by the Roaring Forties winds help to minimise this risk, but not eliminate it. Trees such as Huon, King Billy and pencil pines are so slow-growing, that a major fire would destroy much of the forest beyond recovery.

As we followed the snaking river, the atmosphere took on more of the primordial. A wedge-tailed eagle flew across, and a flock of colourful rosellas, while the piercing calls of unseen currawongs ricocheted over the water, shattering a silence that was becoming mysterious, almost hypnotic. 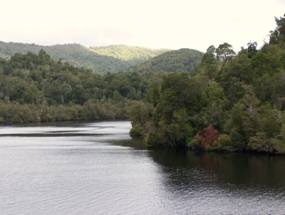 At the northernmost reach of a long loop in the river, about six miles from its mouth, the boat pulled in to a jetty, Heritage Landing, where we disembarked for an up-close view of the forest. A wooden boardwalk led us through the dense growth, over mud flats dotted with mounds that marked the dwellings of the uniquely Tasmanian burrowing crayfish.

A pademelon foraged in the undergrowth. Farther on, a rare white-lipped snake lay coiled on a fallen Huon pine, then slowly stretched itself and slid into a darker crevice.

The pine itself had been estimated as 2400 years old, and though it had fallen, was still growing and providing a habitat for more than 140 plant and animal species.

Arriving back on board, we were greeted by the lavish buffet, which was only the latest in our sequence of refreshments. Throughout the afternoon, we had been continually supplied with drinks, including champagne, and various tit-bits. This meal occupied our attentions while we floated back downriver and across to Sarah Island for our final excursion. 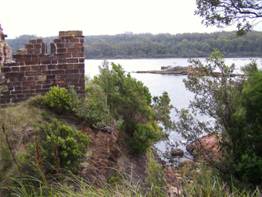 Apart from the ruins, there was little to see. A sad, abandoned atmosphere clung about the place. Broken walls, mounds of grass covering foundations. The original forest had been cleared in 1822, but fast-growing opportunist trees had now re-colonised the space. A small number of Bennett’s wallabies had been brought onto the island, by the Tasmania Parks and Wildlife Service, to control the grass. The only other animal life consisted of whip snakes and skinks, though birds like currawongs, black cockatoos and cormorants were common. Numerous swallows swooped low over the ground.

The penal settlement opened here in 1821, and for the following twelve years, its convicts worked from dawn to dusk, cutting down the Huon pines and building ships. Over these and succeeding years, more than 130 ships were built around Macquarie Harbour.

Conditions for the prisoners were brutal, and many attempted to escape, though with little success, because of the wildness and density of the all-encompassing forest. The most notorious escapee was Irishman, Alexander Pearce, who twice ran away with companions, resorting on both occasions to murder and cannibalism in order to survive.

Pearce’s story caught the imagination of Tasmanian film maker, Jonathan auf der Heide, who made the prizewinning film, Hell’s Gates, as a graduation project while studying at Melbourne University’sSchool of Film and TV. He developed the theme in the more recent production, Van Diemen’s Land, which opened in Australian cinemas, to critical acclaim and commercial success, in September 2009. An earlier film, The Last Testament of Alexander Pearce, explored the same compelling story.

Sarah Island closed as a penal colony in 1833, the remaining convicts being transferred to the much larger and now more famous, and better preserved, Port Arthur. The buildings of Sarah Island were allowed to crumble to their present state of decay.

In recent years, Australia’s convict history, once regarded as utterly shameful, which in most respects it was, has come to be recognised for its importance in the building of the nation. Australians now actively seek and proudly proclaim the presence of a convict in their ancestry. This attitude should ensure that sites such as Sarah Island, until now virtually unknown, will take their rightful place in the telling of this history. Indeed this significance fulfils one of the criteria for which the Tasmanian Wilderness claims World Heritage status.

Dusk was approaching as we returned to Strahan, which we reached at around 8 pm. The cruise had lasted a fascinating and thoroughly enjoyable six hours. We strolled along the quiet street, back to the site of our campervan. The falling darkness enhanced the impression that we were clinging to a tiny patch of human settlement, isolated by the sea to the west and the pristine wilderness to the east. It was a strange but not at all unpleasant sensation.

Back to Australia and Far East