The first thing you notice is the heat, which hits you like a breath from an oven. Even the double-glazed window of the hotel bedroom was warm to the touch. We had arrived in Singapore at 5.50 a.m. local time, after a 12-hour flight from Heathrow. Our body clocks told us it was 10 p.m., so while the city was waking, we just wanted to collapse into bed. Resisting temptation, we stepped out onto the main thoroughfare, Orchard Road. Pools of water from a dawn shower disappeared as we watched, their vapours adding to the humidity that hung over the city like a blanket. Even without moving, we perspired.

Singapore must be the cleanest city on Earth. We saw not a speck of litter on the streets. Chewing gum is banned everywhere. Eating, drinking or smoking on the Metro (MRT) stations or trains merits a $500 fine. Those antisocial enough to smoke on the streets must do so while standing alongside a rubbish bin, all of which have ashtrays inside. You quickly get the impression that while Singapore may be a good place to live for the law-abiding, the penalties for even mild social inadequacies can be draconian.

A further impression that slowly seeps in is that the aspirations of the people are western. Why, I don’t know. Perhaps it is a relic of the colonial past. These people are beautiful. Small, slim and universally dark-haired, they are a mix of Malay, Chinese and Indian. Yet advertisements in the shops for everything from clothing to beauty products nearly all show European models. The newspapers re-inforced the impression. A full-page in The Straits Times advertised a Manchester United credit card, while a headline on the sports page read ‘Poor show Liverpool’. One item in the same newspaper, however, would never appear in a British broadsheet. It reported, with a photograph, the sacrifice of the first of 5000 sheep to celebrate the start of the Muslim festival of Hari Raya Haji. 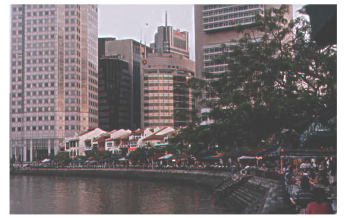 Singapore at night is magical. We went to The Sizzling Rocks, one of the numerous tiny restaurants that serve food along the waterside of the Boat Quay. Our meal consisted of slices of raw chicken breast and vegetables, which we cooked to our individual tastes on untouchably hot ceramic tiles that were placed on the table before us. Even as the sun sank, the heat and humidity remained overwhelming, and quickly fogged camera lenses. But as the lights were switched on, the scene transformed into a wonderland. Tall buildings lit up like galaxies. Many had lights studded up their edges, delineating their shapes against other structures, or the sky. And where these were reflected in a broad stretch of water, they assumed an almost transcendental quality that compelled and held the gaze.

Still jet-lagged, we tossed and turned until 5 a.m., then slept until 10. On our second morning, we took a half-hour river cruise from the Raffles landing site. This afforded us a more open view of the city than could be seen from the streets. We then returned to the MRT for a ride around the city. Much of the rail system was underground, with platform doors that open only to allow passengers to board or alight from the trains. We disembarked for the short walk to the Science Centre, where we spent a very entertaining couple of hours. Each of the halls that radiated from the central hub concentrated on a different science. There were displays about physics, biology, aviation and information technology. Only my own particular discipline, chemistry, was poorly represented, but partly compensated for by the best display I have ever seen about my second love, mathematics. Outdoors, children, and not a few adults were enthralled by a kinetic garden and aquatic maze.

Back on the, by now rush-hour train, we continued our circular tour of the suburbs, through the crowded, though still green and very clean rows and rows of residential flats. Much of Singapore’s land consists of imported soil, which is left to settle for ten years before being built upon. The flats are constructed by the government, then sold as empty shells, to be filled as the buyers see fit. All of the food is imported. Water is brought in from Indonesia, as are the gas and oil that power the city.

The following day, we resumed our journey to Sydney. The airport road was broad and straight. Our driver informed us that the rows of flower boxes that separated the carriageways could be rapidly removed to allow it to be used as an additional runway in an emergency.

Back to Australia and Far East