This article was written following a trip as a guest of Isle of Man Tourism.

On a clear day, the Isle of Man is visible from the coasts of Ireland, Scotland, England and Wales. It appears just to hover there, blue, detached, like a magic mountain above the horizon. It could almost be an afterthought, a small pile of earth left over from the creation of the British Isles, dropped into the sea to fill a gap, or complete the picture.

The air of not seeming to belong is reinforced by the knowledge that it does not belong, but is its own little political unit, independent of any other government. But that is only one of the many surprises that it unfolds as you get to know it.

The first impression one forms, on flying into Ronaldsway Airport, is that the island is bigger than those vague views on the horizon suggest. This is quickly replaced by the realisation that it is much smaller. Measuring 53 kilometres by 21, it can be driven around comfortably in a day, or half that if one takes advantage of the absence of a speed limit.

In its topography and place names, it is Ireland in miniature. The coastline is that of Kerry or West Cork. The hills are the rounded humps of Wicklow. To the north are the Kildare flatlands. Everywhere there are ancient monastic relics, Celtic crosses and the dolmens of the Burren. And the many glens reflect those beauty spots that we all like to keep as our own special secrets.

The hills maintain the character of the miniature. Six summits rise above the 500-metre contour, and only one of these exceeds 600 metres. The Isle of Man therefore is a place for walking rather than mountaineering. Nevertheless, it does encourage the fickleness of mountain weather, and the hills often look and feel bigger than they are. 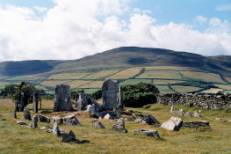 On a breezy day, we gathered at the Black Hut, near the highest point on the TT motorcycle circuit. A misty Snaefell rose above us on one side of the pass, a clear, though hazy Clagh Ouyr on the other. Heading for the latter, we crossed a short boggy stretch, then continued up grassy slopes, and within twenty minutes, stood on the summit. The effort had been slight, yet this was the third highest point on the island. Ahead lay three more of the 500-metre tops, linked by a ridge, which though grassy, was sufficiently narrow and steep-sided to have a mountain feel about it.

The wind remained cool and strong, and blew in the occasional shower and wisp of cloud. A gap in the cloud, as we reached North Barrule summit, opened a view down to Ramsey and its pier, which at650 metres, is longer than Snaefell is high.

We dropped off the ridge to the south and found immediate shelter from the wind. As we approached the abandoned farm of Park Llewellyn, the sky cleared and Snaefell began to part the clouds beyond the valley head. Along the floor of the valley were the ruins of a number of keills, cells used for meditation by the early Celtic monks. Elsewhere were the more recent relics of a now dead mining industry. By the time we reached the side of Clagh Ouyr, before dropping back to the Black Hut, even the sea haze to the east had thinned, to reveal the Cumbrian coast and the vague outlines of the Lake District hills.

On another day, we left Ballaugh, near the west coast, for a walk up the hills on that side of the island. This time, it was the morning that glowed with sunshine. A narrow, surfaced road took us steadily uphill for about a kilometre, then gave way to a more broken track. The view to the north opened out over the plains of glacial deposits that the locals humorously refer to as the hill country.

We followed the track southward for a further four kilometres to a col, then up the slope to the summit of Slieau Freoghane. From here, not only could we clearly see the southern coast of Scotland, but to the west, could just make out the hazy shapes of the Mourne Mountains.

After returning to the col for lunch, we followed a right fork in the track across open moorland, past Slieau Dhoo and Mount Karrin, and steeply downhill through woodland and into the village of Sulby. As we returned to Ballaugh along an old railway track, the sky darkened. Rain began to spit, but only turned heavy as we reached our morning’s starting point.

The southern half of the Isle of Man is less hilly than the north, but compensates with a multitude of hidden beauties. Dalby Mountain, with its internationally rare heathland nature reserve, forms one apex of a triangle. To its north is the narrow, wooded Glenmaye, thought by many to be the most beautiful of the glens. And to the west is the equally beautiful Niarbyl Bay. From the narrow rocky promontory of Niarbyl, the coastal hills reach south to Port Erin, over a line of spectacular cliffs, with the Calf of Man just peering round the side of Bradda Head.

On arrival at The Sloc, the high point of the road that touches the col between Cronk ny Aree Laa and Lhiattee ny Beinnee, we were greeted by a small flock of choughs, heading for a nearby cliff. These members of the crow family were once widespread throughout the British Isles, but are now confined to a few pockets along the western coasts. A few minutes later, a hen harrier flew over us. Like the chough, this is a bird that is quite common in the Isle of Man, but rare elsewhere.

The track up Lhiattee ny Beinnee was steep but short. Cloud hung over the top, robbing us of the view, though we remained aware of the 300-metre precipice that fell away into the sea from just a few metres to our right. The convex ridge gradually steepened, and brought us out of the mist and down to the pebbly shore of Fleshwick Bay, locked in by Lhiattee ny Beinnee to the north and the more formidable Bradda Hill to the south. The charred black soil of Bradda Hill, exposed by a major heath fire the previous winter, lent a grim atmosphere to the scene, already darkened by the overcast sky.

Bradda Head and Calf of Man

The day we climbed Bradda Head was warm and sunny. Our track took us around the north of Port Erin Bay, from where we could watch the huge bulk of a basking shark circling lazily close to the shore. We climbed up past a folly built to commemorate a local benefactor, and continued across the burned heath. From a point on the edge, we looked down toward some abandoned mine workings that clung precariously to the cliffs high above the sea. The rocks themselves were, in places, stained a vivid green by the copper salts that still leached out of the drifts.

On a shoulder of Bradda Hill, just above where the slopes began their steep descent into Fleshwick Bay, we came across a series of interconnected stone circles. These had been uncovered by the previous year’s fire, and until then, their existence was unknown. Their age and origin remain mysteries.

The hills of the Isle of Man lack the fierce ruggedness of the high mountains of the British Isles, and perhaps have little to satisfy those who seek only that kind of challenge. But anyone who can appreciate more subtle beauties will find them here in abundance. And the island is easily accessible for a weekend or a break of a few days. For those who prefer company, there is an annual walking festival at the end of June. But why wait until then?

Though its resemblance to Ireland is quite marked, it does retain its unique character. A first visit is very unlikely to be the last.