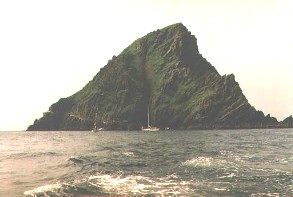 I stood on the small platform of rock alongside the forlorn and heavily corroded steel cross. Some 217 metres below me, heaved the swell of the Atlantic, into which I felt I could have plunged directly, from any of the tiny ledges that surrounded me. Some of these ledges, all of which scraped the edge of the void, held the remnants of low, mortarless walls, windbreaks against the gales that might disturb a monk from solitary meditation. For this was the summit of Skellig Michael – “God’s Hostile Refuge” – a jagged, rocky pinnacle, rising abruptly from ocean depths, eight miles from the West Kerry coast.

It was here, and in places like it, along the fringe of the continent, that Christian civilisation, as Kenneth Clarke observed in his television series, survived “by the skin of its teeth” during the Dark Ages of Europe’s history.

Three hours earlier, at 9am, I had boarded the boat for the one-and-a-half hour journey, at Portmagee, a small fishing village on the Kerry mainland that looked across a narrow sound to Valencia Island. I was accompanied by my nephew, three scuba divers and seven Germans. The boat was licensed to carry up to twelve passengers, so we had all needed to book our passages in advance.

As we chugged out of the sound, toward the open sea, the Germans spoke German and the divers, together with my nephew, who has aspirations in that direction, spoke diving. I was left to contemplate the passing scenery alone. And it was certainly worth contemplation. The cliffs of the mainland fell in unbroken sweeps for up to 300 metres. Those on Valentia were lower, but more intricate, being cut by caves and narrow gullies in which small boats, probably owned or hired by divers, were moored.

Cormorants flew with determination over the sea, while gannets dived recklessly for fish. Numerous puffins watched the boat’s approach before taking off in flap-winged panic to bounce upon successive waves to a safer distance. In contrast, gulls glided with scarcely a wingbeat.

We passed Small Skellig, the 135-metre-high neighbour of Skellig Michael, and continued to a mooring in the sinister-looking, and named, Blind Man’s Cove, on the eastern side of the taller rock. With instructions for us to be back by one o’ clock, the skipper then sailed off, with the divers, in the direction of Small Skellig.

A roadway, built to service the lighthouses on the west of the rock, led along the cliffs and around the narrow defile of Cross Cove, the walls of which echoed to the ceaseless calls of hundreds of kittiwakes. Past a helicopter landing pad, we came to the first of the 600 steps that were to lead to the monastery. Overweight visitors sat panting on the steps, for the ascent is long and steep.

One of the major difficulties of the ascent lies in avoiding the countless puffins that dart into and out of the burrows that dot the slopes on either side of the staircase. Some 2000 of these comical little birds inhabit the rock. They have no fear of visitors, and one can, quite literally, sit down at arm’s length from them.

The monastery stands just below the 182-metre-high northern pinnacle of Skellig Michael. When, and by whom it was built is unknown, though local legend attributes its foundation to St Fionan, and its mode of construction suggests the sixth century AD. Other similar settlements are to be found in Ireland, but none are in as good condition, or in so wildly impressive a situation as that on Skellig Michael.

The site consists of six stone beehive huts and two oratories, which stand on stone terraces bounded by walls that jut in terrifying fashion over the precipice. The buildings are corbelled: constructed of flat stone slabs, piled up without mortar in such a manner that each row holds the lower one in position, with the whole structure narrowing to a final capstone. Draughts may have been minimised by a covering of sods or thatch.

The harshness of life here can only be imagined. Journeys to and from the mainland, in a skin-covered curragh, must have been major undertakings. Rain, channelled into hand-cut storage wells, provided the only water supply. Food was more plentiful, in the forms of fish, seal meat, birds and eggs. Goats and sheep were imported for variety of diet. Crops were grown by the monks and many of the island’s wild plants proved edible.

Throughout the ninth century, Skellig Michael suffered a series of Viking attacks, yet managed to survive, even to the extent of converting to Christianity, a man who became king of Norway and father of that country’s patron saint.

As Europe became more settled, politically, the Irish blend of monasticism spread back eastwards, via Scotland and Northumbria, until it came into conflict with the more evolved, Roman form, as practised by the Augustinians and Benedictines. Skellig Michael resisted for a time, a situation that led to anomalies. As a result of disagreement over the date of Easter, and hence Lent, for example, marriages could be performed on Skellig Michael when they could not on the mainland. By the eleventh century, however, a period of extreme weather conditions finally forced the abandonment of the monastery.

I retraced my steps to Christ’s Saddle, which dips between the two pinnacles of the island, then searched for a route to the higher summit. This led along some very airy ledges and up short walls and a narrow chimney. Though not difficult, the route demanded a head for heights, and perhaps some experience of mountain exposure.

The lighthouse lay far below me, on a promontory above Seal Cove. This, and the now disused one to the north, were established in 1826, following numerous shipwrecks over the centuries. It was manned continuously until 1987, when it became fully automatic.

I reached the summit, and sat like an anchorite on his rock, perhaps feeling something of the solitude of the monks. On the saddle, several minuscule figures moved about, though none came to join me. A mile away, Small Skellig shone in the sun, while farther, the Kerry coast faded into haze.

Having found the safe route, I returned for my nephew, so that he also could share, for a few minutes, the unique grandeur of my high pulpit.

On the return boat trip, we crossed to Small Skellig, accompanied by a school of dolphins. Seals basked on the rocks, while gannets provided incessant noise. The Small Skellig is almost completely white, being occupied by an estimated 23 000 breeding pairs, making this the world’s second largest gannet colony. Only St Kilda holds more birds.

Back on the pier at Portmagee, I was only beginning to unwind from the excitement of the trip. The time was 2.30pm, yet I felt it had already been a very full day. I also felt more than a little envious of those who took our places in the boat for the afternoon visit.