Though it defined the shapes of two countries, it remains, to North Europeans, a forgotten war. While Britain, France and Germany fought to a standstill in the Flanders mud, Austria and Italy were engaged in a similar struggle, high in the snows of the Dolomites. From 1915 to 1917, the ‘White War’ mirrored the excesses of The Somme, with its barbed wire and trenches. It also included the construction of a remarkable city, carved into the ice of a glacier.

A coach took us the six miles from Canazei to the dam of Lago di Fedaia. As we leapt onto a passing ski lift, Ian, from Glasgow, hid his face in shame. “This is cheating,” he muttered. I was able to comfort him somewhat by confessing that I had twice used the gondola on Aonach Mor. 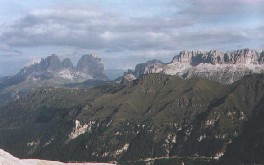 The scene from the top station was stunning. The greenery of the near valley appeared to have been chopped off at the top, to give us a view of the white and grey of the screes and escarpments of Sass Pordoi. The high pillars of Sassolungo, Cinque Dita and Sasso Levante dominated the Sella Pass to the extent that the Sella Towers looked like mere afterthoughts: tiny notches on the tail end of a ridge.

The Marmolada, highest peak of the Dolomites, disappeared into thick cloud above us. We dropped down onto a barren, stony track, over glaciated slabs and round the base of a crag, then up again to the foot of the Vernel glacier.

Once a branch of the Marmolada glacier, the Vernel is now a small ice sheet, left to stand alone as a result of the retreat of its parent.

Until 1918, this region of Italy, Trentino, belonged to Austria, a fact that explains the Tyrolean appearance of the houses and villages. For several months after the outbreak of the Great War, nothing much happened here. Then in 1915, Italy declared war on the Austro-Hungarian Empire, and the Marmolada became part of the front line.

Both armies dug in and fought similar battles to those on the Western Front. Here, however, the trenches and gun cavities were dug into snow, often above the 3000-metre contour, and sometimes into the bare bedrock. Modern technology allowed for the building of cableways to carry food and weaponry onto the peaks, and the first Via Ferrata were constructed.

In the Marmolada glacier, the Austrian engineer, Leo Handl, designed a series of tunnels, many following crevasses, others dug using mining techniques. Ultimately, this grew into a 12-kilometre network, fifty metres below the glacier’s surface. The ‘Town of Ice’ had barracks for 250 soldiers, canteens, a field hospital, storerooms, an electric power station, telephone switchboard, officers’ bar and a gas-proof room for testing gas masks.

Though the Town of Ice has crumbled with the downhill glide of the glacier, relics of the war still rise to the surface after more than 80 years. On our cramponed ascent, we came across a lump of metal about five or six centimetres in diameter. It was almost certainly a piece of shell casing. 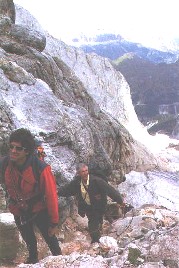 On reaching the bergschrund at the top of the glacier, we removed our crampons and set off up the Via Ferrata. The angle was not steep, and what was a relatively easy scramble was made even easier by the steel rope fixed to the rock, which led to a narrow notch between two almost vertical faces. This was the Forcella della Marmolada, at 2896 metres (9505 feet), the highest point of the day.

The Via Ferrata continued horizontally across a wall for a few metres, then descended a series of steel rungs to the top of a scree slope. This allowed a rapid drop of several hundred metres to the Valle di Contrin.

A zig-zag track led us down to the grassy slopes of the valley’s middle reaches, past a small herd of chamois grazing beneath a crag. In the scattered woodland above the Rifugio Contrin, we heard some strange whistling sounds, which at first, we thought came from birds. They turned out to be marmots, several of which we saw scampering among the boulders, maintaining a distance from us of about 100 metres.

Nearer the hut, the hillside was marked by numerous depressions. A set of parallel lines, 50 metres apart, marked the trenches of battle. Scattered around these were the grassed-over remnants of bomb craters.

The Contrin Hut provided us with an evening meal and a night’s rest. Even here were reminders of the war. Items of detritus dropped by the glaciers, or dug from the pastures adorned one of the window sills: trenching tools, picks and spades, bomb and bullet casings, helmets, barbed wire and the occasional splintered fragment of human bone.

The next morning, we set off toward the Passo delle Cirelle, to the south. The track took us along the base of the Cima Ombretta, which the previous evening, we had watched turn crimson in the Alpenglow. Rising past the 2400-metre contour, we entered a barren grassless realm. There was no glacier, but where snow had filled a hollow, it remained frozen to the bedrock.

Depressions that might have been trenches or bomb craters were filled with tangled masses of barbed wire, their nearly 90 years of rusting retarded by the cold of altitude.

As a memorial to the fallen, a long-distance walk, called the Path of Peace, has been created along the 450-kilometre course of the front line. Inspired by historian Claudio Fabbro, it is supported by the Trentino Tourist Board and the provincial departments of labour and the environment. It runs south from the Marmolada, along the southern boundary of Trentino province, then west through Riva del Garda, before turning back north, to leave Trentino through the Adamello-Brenta Nature Park. In places, the trenches themselves have been cleared of debris, so that the walk can pass through them.

The Passo delle Cirelle, at a height of 2683 metres (8806 feet), ran between two peaks. An ascent of 130 metres over scree and crumbling slab took us up Punta Zigole, to the east. From the summit, shattered ridges led away to crags that plunged for almost 1000 metres to precipitous screes, which themselves swept down to the green floor of an Alpine valley. To the north stood Cima Ombretta and the 3000-metre peaks that flanked the Marmolada.

We returned to the pass, and with pause only for a drink of water, headed up the second peak, Cima Cadine. At 2885 metres (9469 feet), this was higher than its neighbour, but the gradient marginally less steep and the view arguably a little less spectacular. A cave in a small crag marked the one-time position of a gun emplacement, while a final poignant relic, a bleached and desiccated thigh bone, lay at the side of a cairn, just below the summit.

The descent from the pass was rapid, down a 600-metre slope of small-pebble scree. This led to a more leisurely zig-zag path, and a valley of a greenness that contrasted surreally with the unmitigated grey that had surrounded us since the morning.

Cows with clanking bells cropped the meadow grass. On the gentle slopes to the side, farmers cut hay. And in front of us, the picture-book prettiness of an Alpine hamlet, and the hospitality of the Rifugio Fuchiade beckoned seductively.

As we stepped into the picture, thoughts of wars and their legacies receded to infinity.