This article followed a trip to Madeira as a guest of Madeira Islands Tourism.

Our first attempt at Pico Ruivo, at 1862 metres, Madeira’s highest point, was snookered by a landslide. We had intended a short ascent from a car park at Achado de Teixeira, followed by a long downhill exploration of the laurel forest to Ilha. Unfortunately, a crag had collapsed and blocked the road from Santana with fridge-sized boulders. Manuel and Renado were not worried, however. This was a common occurrence and the road would be cleared by the next day. They quickly decided that we should approach the forest from below rather than above, As we would not have time to climb Pico Ruivo, they promised us a destination which, though different in kind, would in its own way be sufficiently impressive.

From Ilha, we followed a narrow, muddy track steeply uphill. Though it was mid-January, the mimosas were in bloom and a summer humidity clung to the evergreen forest. After nearly an hour, we entered denser forest and a junction with the Levada dos Caldeirão Verde.

The primeval laurel forest of northern Madeira, now a UNESCO World Heritage Site, captures moisture from Atlantic mists and drains it into a sodden soil. From the seventeenth century, this water resource has been transported around the island by a system of shallow, low-gradient channels, known as levadas. Built initially by slave labour, the levadas now extend to a total length of around 1400 kilometres, which is twice that of all the island’s roads. The maintenance walkways alongside the levadas provide a network of footpaths, which are often the only means of reaching the more inaccessible regions of forest and mountain on Madeira.

Immediately on joining the levada, we entered the first of a series of tunnels dug through the hard basalt bedrock. Between these, we traversed narrow ledges across precipices overhung by a dense jungle of laurel and ferns, which obscured much of any view. But when the jungle opened, it revealed deep valleys with near vertical sides, clothed in woods that appeared, from our position, to be impenetrable. The rocks around us were hidden beneath a water-logged layer of lichens, mosses and bryophytes, which slowly trickled moisture into the levada. A wire rail guarded dangerous crossings, but even this, in places, had been swept aside by rock falls.

At the levada’s end, a short continuation track led over boulders and without signalling its intent, into the base of an enormous gash in the mountain, Caldeirão Verde. Imagine if you can, a green-walled Malham Cove, wrapped around you on three sides. The scene was far too big and enclosed to be captured by even a wide-angle camera lens. Looking toward the top of this near-cylindrical, roofless cavern caused a strain in the neck. Water rushed down the walls in several places, feeding a lush of vegetation. In places, it parted from the rock, and dripped free into a green plunge pool in which trout were swimming.

After a lunch eaten in these awesome surrounding, we retraced our route to the junction with the track from Ilha, then continued along the levada, which snaked through another tunnel, and around the heads of narrow valleys to a road end at Queimadas.

Two days later, we stood in unblocked sunshine on the 1818-metre summit of Pico do Arieiro. We were fifty metres from the car park, but feelings of guilt were flung onto the ocean of cloud beneath us by our anticipation of what lay ahead. All around was a wasteland of red rock with hardly a plant, which fell away into valleys we could not see the bottoms of, bounded by a jumble of jagged peaks that rose on all sides. Pico Ruivo was little more than three kilometres away, in a direct line, but the contortions of the ridge would at least double this. It lay hidden behind Pico das Torres (1851 metres) with the intervening gap looking highly improbable. But it drew us like a double-height Cuillin ridge.

View from Pico do Arieiro

A well-paved track led us down a fairly gentle slope to a viewpoint on the edge of the first crags. Then the slope steepened to establish the pattern of the rest of the walk. The rock shone various hues of red, but with darker basalt dykes breaking through the softer igneous ash and conglomerate like so many ‘Inn Pinns’. Lichens, yellow from frost-burn hung over small flowers, in bloom despite the altitude and the season, while tiny lizards darted across sunnier patches.

The track now fell in a long drop to its lowest point, 1542 metres. A tunnel through to the far side of Pico das Torres had been blocked by a rock fall, so we had to regain height by way of a staircase cut up the side of the mountain. A tremendous effort had gone into the construction of this track, but it did not make the route easy. It merely made it possible, for without it the traverse from Arieiro to Ruivo would involve serious climbing for most of its distance.

We continued down a lesser fall, then along an overhung ledge that cut across a face of Pico das Torres. This led us to a heather-covered col, with Pico Ruivo above. Some of these heathers were of tree height, and perhaps 1000 years old. The smaller plants would probably grow to a similar height, now that grazing animals had been removed from the hillsides.

A gentler, though sustained zig-zag ascent brought us to a house that sold a limited range of refreshments and offered a night’s rough comfort if necessary. It stood, like a miniature Neuschwandstein, on a promontory jutting out over the wooded valley of Caldeirão Verde. From there to the summit of Pico Ruivo took us a further fifteen minutes.

The full traverse from Pico do Arieiro had occupied us for little more than three hours, yet as we looked back, it was difficult to pick out our exact route. It still appeared somewhat unlikely.

The following morning, we were again on top of Pico Ruivo, having made the short ascent from Achado do Teixeira. This time, our objective was the 1004-metre high pass at Encumeada, to the west. This pass separates the central craggy mountains from the high plateau of Paul da Serra in the west. But to reach it, we would have to cross the Picos do Madeira, a series of peaks which, while slightly less rugged than those to the south, presented their own problems. And the distance was more than twice that of the previous day.

The track led off round the side of Pico do Coelho and into a forest of heather trees (Erica arborea). It became clear that our route would skirt around rather than climb over the peaks. While there were some steep crags surrounding the summits, the real barrier was in the heather, which covered every patch that was not either vertical or overhanging. These heathers are genuine trees, and so densely packed as to make the forest impenetrable. As this whole area is part of a unique ecology that has to be preserved, cutting the trees is forbidden, so few climbers, if any, are likely to reach these summits in the foreseeable future.

Rather than a continually changing view, our route opened out a series of spectacular scenes where the forest thinned. The dips between peaks were not as deep as on the previous day, but there were more of them.

We passed Pico das Eirinhos (1649 m) and ate lunch at Boca das Torrinhos (1450 m), where our track was crossed by one that linked Lombo do Urzal to the north with Curral das Freiras, the Valley of the Nuns, to the south. The latter was the site of a convent set up in this hidden valley during the sixteenth century as a refuge from frequent pirate attacks. 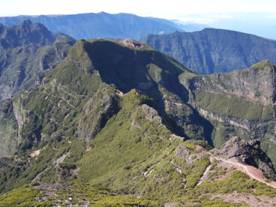 We snaked around Pico Casado (1725 m), then rose steeply almost to the summit of Pico do Jorje (1691 m) before passing Pico Ferreiro (1580 m) and Pico do Encumeada, beyond which lay the final descent to the pass.

Madeira is only marginally larger than the Isle of Man, but the contrast could not be starker. With mountains three times as high, and the northern half covered by primeval forest, Madeira can undergo several climate changes in a day. One part of the island can scorch in sun, while another drenches in rain. Adjacent valleys can experience vastly different weather conditions at the same time.

In a moment of idle speculation, I wondered what the mountains would look like in winter. Then I realised that this was winter, mid-January, yet I had stood above the clouds, on the highest point, in a T-shirt. I even swam a couple of times in an outdoor pool. In a week, I suffered one day of mist and light drizzle, and returned home with more than the beginnings of a suntan.

The forest density precludes ascents of some mountains, but there are others, such as Pico Grande (1654 m) and Cedro (1759 m) that could be climbed. There is certainly more than sufficient to repay several visits. And I had hardly begun to look at the coastal scenery and wild life of this beautiful island.