Nature, it seems, prefers an imbalance in its structures. Most people, for example, are right-handed, with the left-handed being in a minority. Climbing plants generally twist their tendrils in one direction, with only rare exceptions. Snail shells usually show a dextral, or right-handed spiral, with very occasional individuals displaying the sinistral.

This preference for one kind of ‘handedness’ over its twin extends everywhere, even down to the level of one of the fundamental units of Chemistry, the molecule.

In 1848, Louis Pasteur separated two types of crystal from a solid deposit formed in wine vats during fermentation of grape juice. One crystal was found to be that of the already known tartaric acid. The other was its mirror image. The properties of the two crystals and their solutions were identical in almost all respects, so it was concluded that they differed only in the fact that the molecules from which the crystals were made were themselves mirror images of each other.

Substances like tartaric acid, which can exist as mirror image molecules, are very widespread in Nature, and are referred to as chiral. Their existence depends on the fact that carbon atoms have the capacity to bond to four other atoms or groups of atoms when forming a molecule. If no two of these groups are the same, then the possibility of mirror image molecules arises. The strange thing is that, while both forms of a chiral substance can generally be made in a chemistry laboratory, if such a compound exists in Nature, only one form is normally present. 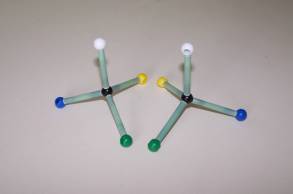 The mirror image forms of a particular compound can be distinguished by a property known as their optical activity.

Light can be thought of as a series of waves passing through space. These waves vibrate in all directions, vertically, horizontally etc. If light is passed through certain kinds of crystal, waves vibrating in all but one direction are absorbed, and the emergent light is referred to as polarised. For example, the lenses of polarising sunglasses contain crystals which allow the transmission only of vertically polarised light. Horizontally polarised light, such as that reflected from a shiny road surface, is absorbed by the lenses.

When polarised light is shone through a solution of a chiral chemical, the direction of polarisation is rotated to the right (clockwise) or the left, depending on which mirror image form of the molecules is present. The two forms are therefore distinguished by the prefixes D- or dextro- for the right-handed rotation, and L- or laevo- for the left-handed.

15% of the mass of the average human body, muscles, skin, hair, ligaments etc., is made of proteins, as are the haemoglobin in the blood, hormones, such as insulin, the antibodies that fight disease, the enzymes and chemicals essential to the proper functioning of the body. These proteins are themselves constructed from various combinations of amino acids. There are a large number of theoretical amino acids, but only 20 are commonly found in Nature. All except glycine, the simplest of these, are chiral, and nearly all are found only in the L-form.

In a similar way, plant tissues are made of carbohydrates, which are built up from simple sugars, the most important of which is glucose. The fact that there are four chiral carbon atoms in each glucose molecule leads to the possibility of sixteen different molecular shapes. Only three of these exist naturally, and all are of the D-form. The yeast enzyme, zymase, will convert all three into alcohol during the fermentation process, but has no effect on the synthetically prepared mirror image sugars.

The second most common simple sugar, fructose, is found in fruits and nectar and is the sweetest of all sugars. It is unusual in being the only natural sugar which exists only in the L-form.

The common, domestic sugar, sucrose, is a combination of glucose and fructose, and has a right-handed rotatory effect on polarised light. When broken down into its simple sugars, it becomes left-handed, because the effect of the fructose is greater than that of the glucose. This mixture is often referred to as invert sugar.

When sugars are broken down in the muscles, to produce energy, one of the products is lactic acid. This compound, which is responsible for fatigue, is only found in muscles in the D-form. The lactic acid found in sour milk, however, consists of an equal mixture of the D- and L- forms.

Just as glove will only fit the hand for which it is designed, the molecules in the body can only respond to chemicals of the correct orientation. The mirror image form of a chemical will provoke a completely different response.

The  L-form of limonene, for example, is responsible for the smell of lemons, while the D-form smells of oranges. L-carvone smells of spearmint, D-carvone of caraway. L-nicotine, the natural tobacco product, is toxic; the D-compound much less so. L-adrenaline strongly constricts the blood vessels, while its mirror image has little effect. The mirror image form of the important anti-oxidant, vitamin C, has almost no effect in the body.

­Most drugs are chiral: amphetamines; the pain killer, ibuprofen; the heroin substitute. methadone. In such cases, only one form is effective. Its mirror image may do nothing at all, or it may cause unwanted side effects.

The most notorious example of the importance of chiralitv in drugs is seen in the thalidomide tragedy of the 1960s. D-thalidomide is a safe remedy for morning sickness in pregnant women, and where only this was present, there were no problems. Unfortunately, some samples of the drug contained a mixture of the D- and L-varieties, and it was the latter which led to deformities in thousands of babies whose mothers had taken the drug.

In an effort to avoid repeating such tragedies, the left- and right-handed forms of new drugs are now tested separately before being passed for use. Care is still needed, however, as there is evidence that one form may sometimes be changed to the other, inside the body.