When I think of the Lake District, or Snowdonia, I recall memories of high summer. I see visions of populous crags warm beneath a blistering sun; long, lazy days on which the heavy, whispering foliage of trees and the shimmering coolness of the lakes seduce one away from activity. The Peak, whether brown of grit or white of limestone, creates a similar impression, in which the shady cafés of Hathersage or Stoney Middleton continually call one in from the dusty heat.

But to me, Northumberland is autumn, forever autumn. It is not that the summer is always absent. Indeed, there are warm days when the crags shed their green patina, and the calls of partridge and curlew vie with those of the climber in piercing the sunny silence of the moors. But here in the north-east, winter lingers, and a chill hangs in the air until the sun is well advanced toward its rendezvous with the Crab. As if impatient to be gone elsewhere, the season rushes past, and summer is as fleeting as youth. The bracken, it seems, has hardly time to mature to its full height before it browns and withers, while the ling, which holds its blossoms longer than most, is soon blanched, and crackles underfoot.

Yet this is consonant with the hills themselves, and with the crags which cling to them: drab, grey tors emerging incongruously from dark, brown peat, sandstone escarpments, the truncated boundaries of boggy plateaux. As timeless and secretive as Easter Island statues, they gaze silently and morosely over the broad vale of the Coquet, where the river, with no trace of coquetry, spans the plain in wide meanders.

And the crags are vanishing, for year by year the conifer forests advance inexorably to their feet and over their once bare summits. Introductory Buttress, a gentle toner of indolent muscles, is already surrounded, and peers forlornly through the growing saplings which will soon swallow it back into a semblance of the primeval verdure from which it was born. Selby’s Cove, always a hidden jewel, will soon become even more precious, for the evergreen myrmidons have now marched almost to the limits of its steep declivities. Ravensheugh retains an open vista, but its glowering pinnacles throw their impending challenges to fewer and fewer hard-men, for the forest track from Rothbury grows shorter, and the wood more impenetrable with each infrequent visit, and loneliness prevails more and more. Simonside, playground of tyro and expert alike, watches, no longer aloof, as the forest boundary approaches within a stone-throw of its summit, and drainage channels are combed up its slopes for the next advance.

Are all to disappear? To remain only as memories in the minds of a generation growing old? Are they to vanish until the hills become once more denuded, to be rediscovered by a generation as yet unborn, long after technical innovations have relegated them to positions of importance lower than those of practice boulders? And if so, does it matter? Does it really matter? 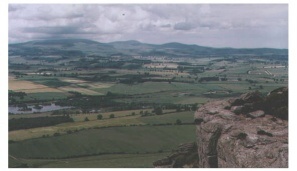 October. A cool day beneath a lead-grey sky. A solitary human figure stands below a crag. Which crag? It is unimportant. He is looking at a climb, his eyes picking out its tiny rugosities, while his mind computes the information received and processes it for possible use. The identity of the climb does not matter, nor does its grade of difficulty. Only the man is important, and the succession of moments through which he exists. It is his use of these moments that make him who he is. That is all that matters. Should he refuse to grasp the moments, then he is less than himself.

He steps onto a boulder, and hesitates. He reaches a hand to the chest-high overhang that begins the climb, and sweeps some sandy particles from a sloping wrinkle on its lip. The other hand reaches for a thin, muddy, vertical crack. A further pause. Then a sudden movement: a leap, a swing. In a second, his former podium has become an ankle-cracking trap, for he is already five feet above it, his boots friction-gripping the sloping holds of the wall, and moving higher. Two more balancing steps on dusty, rounded knobs and he can go no farther. He strides to the left and jams a toe in the crack. He trusts his weight to this as he fulcrums his body. He feels its insecurity, and the boulders on the ground mock him. He places three fingers in the crack above his head, then withdraws them, muddy, to wipe them on his breeches. He tickles the crack again, and scratches a foot up the wall to the right. He balances higher and reaches. Only the tips of three fingers and one foot, a square inch in total area, support his entire weight. The area doubles and the pressure halves as he finds a wrinkle for the other hand. A quick, nervous movement follows, and his hand stretches into a horizontal crack. The other hand joins it and he pauses for a few breaths of air. He pulls hard, toes clinging to smooth verticality, mantelshelfs, and in a few seconds, is standing on the top. Twenty feet and a hundred and twenty seconds.

I gaze over the vale toward Cheviot, but no Cheviot can be seen. The fog of Tyneside’s chimneys, attenuated through distance, yet insidiously stretching its dirty fingers far across the countryside, has mingled with the season’s mists to produce obscurity.

A few moments of time have gone: ripples in an endless flux. Of all people, only I have felt their passing; there were no other witnesses. A grouse flaps and cackles noisily, somewhere on the slopes below me, while the trees and rocks remain in mute incomprehension.

There are no traditions here. Nor is there any frenetic scramble to become part of an overburdened folk-lore: to seek the brittle and transient glory of the market place and the guide book. Those who wish for such rewards have graduated to other rocks to find them. To one for whom such pursuits have long ago lost their validity, these tranquil hills offer something different: quieter, more personal but more enduring.

Perhaps – and I can be no more definite than that – just perhaps, those ripples will spread to infinity.