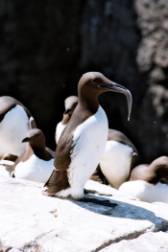 Numbering from the low teens to the high twenties, depending on the tides, the Farne Islands rise from the cold waters of the North Sea, between one-and-a-half and five miles from the Northumberland coast. They are the most easterly remnants of the dolerite intrusion known as the Great Whin Sill, which appears sporadically across eighty miles of northern England. Some of the islands are no bigger than rocks, poking just above the swell. Others are cliff-bound, or rise as tall stacks to heights of more than twenty metres.

In 678 AD, St Cuthbert retreated from the monastery on Holy Island to live as a hermit on Inner Farne, where he stayed for most of the last nine years of his life. For many centuries afterwards, Inner Farne was a place of pilgimage.

The rocks were always a danger to shipping, and lighthouses have been built on several of the islands at various times. The most famous incident involved the wreck of the SS Forfarshire, in 1838, when Grace Darling, the 22-year-old daughter of the keeper of the Longstone lighthouse, twice braved the stormy sea in a rowing boat to rescue survivors. Sadly, Grace enjoyed her fame for only a short time, dying of tuberculosisin1842. Her quite elaborate grave is in St Aidan’s churchyard in nearby Bamburgh.

Lighthouses still stand on Longstone and Inner Farne. In fact the Longstone is said to have the most powerful light in Europe. Nowadays, however, the lighthouses are unmanned. The only permanent inhabitants are the birds.

Much of the Farne islands consists of bare rock, with only a coating of lichens and hardy sprigs of grass or salt-tolerant flowers sheltering in cracks. Where Ice Age glaciers have deposited boulder clay on the larger islands, a thin layer of peat has developed, which supports a few small shrubs, but extensive carpets of sea campion, thrift and scurvy grass. In fact, nearly 120 species of plant have been recorded here.

There is little in the way of sand, the largest of only three beaches being on Inner Farne. This, however, is where most of the terns are found. More than 2000 pairs of Sandwich terns nest here, and often an even larger number of Arctic terns. In contrast, and despite their name, there are only a few hundred common terns, while roseate terns can be counted in single figures. These are aggressive birds and readily dive-bomb anyone who approaches their nests. This is sometimes a problem, as Inner Farne is one of the few islands on which people are allowed to land. Visitors need to wear some form of headgear to avoid pecks from the rapier-sharp beaks.

The terns all fly south for the winter, most to Africa, though one ringed bird is known to have travelled as far as Australia. Some individual Arctic terns have bred successfully on the Farne Islands for more than twenty years. 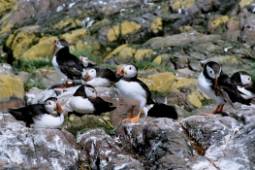 More than 270 species of bird visit the Farnes, most of them during migration. Around fifteen species nest here regularly, including gulls, shags, cormorants and auks. In addition, among occasional and unexpected nesters are lapwings, moorhens, wagtails, blackbirds, wheatears and meadow pipits.

Around 250 pairs of cormorant breed across several of the islands, with more than twice that number of shags on Staple Island alone. The population of kittiwakes is now in the thousands. Their nests occupy tiny, precarious ledges, and often appear to be just stuck onto the bare, vertical rock.

The most abundant birds are the auks. Though there are relatively few razorbills, the number of guillemots is now approaching 20 000 pairs. Huge colonies crowd with little space to spare along flat ledges on Staple Island and the nearby rock stacks known as The Pinnacles. Almost twice as numerous are everyone’s favourites, the puffins, which nest wherever there is sufficient depth of soil to dig a burrow.

Though these populations appear healthy at present, concern has been expressed at their fluctuations in recent years, not just on the Farne Islands, but elsewhere along the whole of the North Sea coast. Over the past forty years, possibly as a result of global warming, cold-water plankton species in the eastern Atlantic have migrated north by ten degrees of latitude (1000 kilometres). This appears to have affected the sandeels on which many of the birds depend for food. 2004 saw a near catastrophic fall in bird numbers around some parts of the North Sea. Many dead fulmars washed up on the North-east coasts of Britain were found to have died of starvation. Scientists of the Dove Marine Laboratory at the University of Newcastle upon Tyne continually monitor the bird populations around the Farne Islands.

The grey seal colony is one of the most important in the British Isles. The seals tend to congregate on the smaller rocks of the archipelago, but can be readily approached in a boat. In fact they will often swim close to boats and pop their heads out of the water in apparent curiosity. 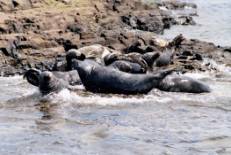 Until the end of the nineteenth century, seals were hunted on the Farnes for their skins and oil, and numbers fell to about a hundred. Today there are around 3500 individuals. About a thousand pups are born each year, though the fierce North Sea storms can often lead to only a 50% survival rate.

Small boat trips to and around the Farne Islands leave the nearby fishing village of Seahouses most days from April to September. The outward journey reveals some of the spectacle of this historic coastline. To the north is Holy Island, while the west is dominated by the impressive structure of Bamburgh Castle and the Cheviot Hills in the distance.

Landings on Inner Farne and Staple Island depend on the weather, and restrictions are imposed to keep visitor numbers down during the breeding season, from May to July. Whether one lands or not, these trips are magic for the proximity to which one can approach huge numbers of sea birds and seals. And there is always the possibility of an extra touch of magic in that one of the many dolphins that frequent the Northumbrian coast might accompany the boat back into Seahouses harbour.